Being part of a business so intimately involved in the fight game, I live and breathe all aspects of the sports we touch on notably Boxing. Boxing is the most popular spectator combat sport in the modern world, and its champions earn more than most other professional sportspeople. The defining fight of this big money era was the 2015 Mayweather Vs. Pacquiao event grossed more than $600 million, with the television networks taking over $400 million, also earning Mayweather an estimated $120 million and Pacquiao around $80 million. The sport of competitive Boxing has its origins deep in the ages, and I was curious how long ago you would have to go back to understand the history and the evolution. After some digging, I quickly realized that it's not hundreds, but thousands of years in human history. Given my personality and obsessive nature, I find myself geeking out and digging further into what's unknown, so here I go sharing some of the interesting historical facts I stumbled across.

Due to the simplicity of the sport and its military benefits, Boxing quickly spread around the first human civilizations nearly 5,000 years ago. Humans have fought in hand-to-hand combat to the death since living in caves. The earliest recorded evidence of fist-fighting competitions was born in the Sumerian cities in the area of modern Iraq at the beginning of the third millennium BC – but Egypt, India, Greece, and China also have evidence of the sport taking place in their ancient civilizations. 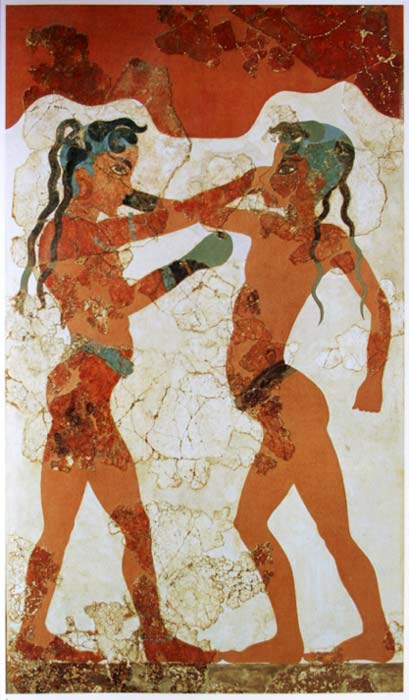 One of the earliest depictions of boxing gloves showing a pair of Minoan youths fighting—Akrotiri fresco circa 1500 BC.

One of the earliest pieces of physical evidence of Boxing is a carving depicting two fighters in the civilization of Samaria dating back almost 5,000 years ago. Furthermore, the votive tablets discovered a few years ago by archaeologists at the Sumerian city of Khafaje date from around 3000 BCE and contained information about boxers.

The city of Thebes was one of the capitals of ancient Egypt, and there, Boxing was depicted on a sculpture dated around 1350 BCE. The sculpture contains three sets of boxers and the Pharaoh himself among the spectators. In the tombs of the 18th dynasty of ancient Egypt (1570-1320 BC), archaeologists found pictures of boxers, wrestlers, and stick fighters.

Several relief artworks (a method of sculpture) found in the Mesopotamian states of Assyria and Babylonia and in the Hittite Empire (a part of modern Turkey) also depict early boxing bouts. At this time, Assyria was a military state, and Boxing could be part of the training of their victorious armies, which conquered the neighboring countries.

Musti-Yuddha is one of the traditional forms of Boxing and originated in ancient India. The sport was mentioned in the classical Vedic epics as the Ramayana and Rig Veda. Another major Sanskrit epic of the ancient Indian civilization, the Mahabharata, also provides evidence of early Boxing in describing fighters and their equipment in the first millennium BC.

This is the absolute beginning of Boxing. Be sure to stay tuned, as we advance through the ages and build out a timeline of how Boxing has become what it is today.